How the bell tent came to be 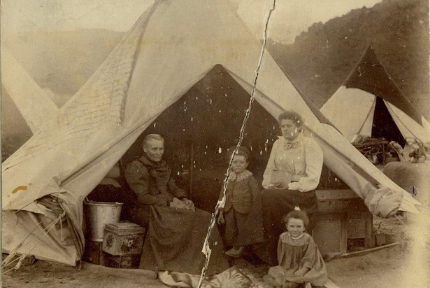 27 Aug How the bell tent came to be

Posted at 19:29h in Bell Tents by Chelsea Eve 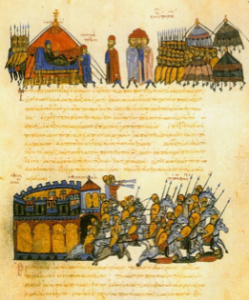 Ever wonder where the first bell tents originated from?

Instantly recognisable all over the world, bell tents have been used for thousands of years by Indigenous people. Flip through the pages of a history book and you’ll see that even the Byzantine empire used bell tent-shaped tents. Illuminated manuscripts from almost a thousand years ago show soldiers using shelters that look just like modern bell tents. Crazy right!

Why were bell tents invented?

The unique cone shape of a bell tent is the most aerodynamic in terms of rain, snow and wind. Although they are lacking in structural support compared to other shaped tents, they are extremely strong and breathable in extreme weather conditions.

How did bell tents become popular?

Even though they’ve been around forever, bell tents experienced their heyday around a hundred and fifty years ago, when they became a home-away-from-home for millions of soldiers around the world. During the Crimean War of the 1850s, they weren’t just used as mobile dorm rooms (with room for 15 men!), they served a crucial purpose on the battlefield: since they were lightweight, portable and had lots of headroom. Bell tents also made great field hospitals and operating rooms for the British Army. 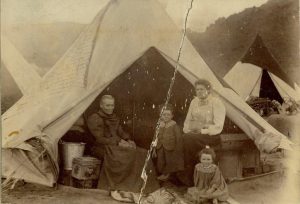 When Australian, New Zealand, British, French and Indian troops were sent to the Gallipoli peninsula to battle Ottoman troops in the Dardenelles campaign, their long and strenuous eight-month battle enshrined their names in ANZAC history. The bell tent provided accommodation for the ANZACS across Europe and Gallipoli.

In the 1900s, with the rise of holiday camping, bell tents filtered into everyday life as young boys grew up spending their summers in them on camping trips and scouting expeditions. When World War 1 broke out, it’s easy to imagine that many of those same boys probably ended up sleeping in bell tents again on the front lines.

Cheap and disposable nylon tents grew in popularity after WW2, but as people have begun to realise their environmental cost, durable canvas bell tents have become the gold standard for environmentally responsible camping. 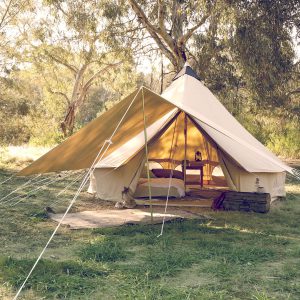 Should you invest in a bell tent?

The mainstream style of tent (you know the one, any camping ground will be filled with them) has been the most popular and commercialised version of tent for years. However, a bell tent has many benefits that you won’t find with other designs. The deep history of the bell tent means the design has been well and truly tested. It is sturdy, reliable, easy to pitch and transport, durable and weatherproof. It will also last you forever – saving the environment and your wallet at the same time.

There you have it! The surprising history of the bell tent and how it has been ingrained in our culture for thousands of years (before we even knew what to call it).

Buy a Psyclone Siesta Hammock at the discounted price of $90 with the purchase of any Bell Tent!